1. What is your position with the Admirals?
Manager - Ticket Operations & Fan Services

2. Where are you from?
I was born in Seattle, WA but have lived in Wisconsin most of my life.

3. Where did you go to college? What is your degree in?
University of Wisconsin-Whitewater, Bachelor of Business Administration

5. What is your favorite sports team aside from the Admirals?
Seattle Seahawks/Seattle Mariners/Seattle Sounders

6. What was your favorite subject in school growing up?
Outside of gym class, it was math.

7. What is the worst gift you’ve ever received?
Bath Towels for the third year in a row

8. If you could have dinner with one person, dead or alive, who would it be?
Bo Jackson

9. What animal best describes you? Why?
A dog because I can be lazy, but also have spurts of high energy.

10. What is your favorite kind of cuisine?
American, specifically cheeseburgers and French fries

11. If you could live during a historic time period, what would it be?
The Industrial Revolution because it was a time of a lot of change throughout the world.

12. Where is the coolest place you have travelled?
Hawaii

14. Since you live in Wisconsin, what’s your favorite kind of cheese?
Cheddar

16. If you could only watch one TV show for the rest of your life, what would it be?
The Office

17. What would be the first thing you would do if you won the lottery?
Buy a house

18. Do you have any hobbies?
Discovering local Beer Gardens

19. What song would you sing at Karaoke night?
Anything by George Strait

20. What was the first concert you ever attended?
Going to Summerfest around 2002 with the family to see a bunch of artists! 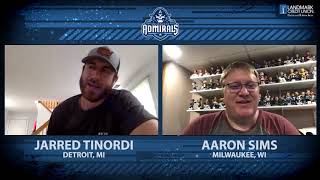 Catching up with Jarred Tinordi 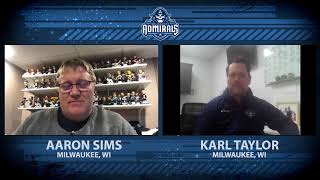